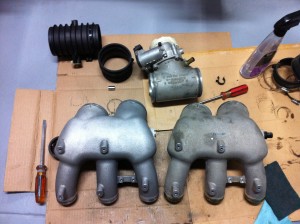 Week 2 has so far been basically consumed with cleaning the engine and also dealing with lots of logistical items. The engine came from a salvage car and they most certainly don’t clean it before they give it to you. Wishful thinking, but I now have much greater appreciation for what ~20k miles does to an engine’s cleanliness. To the right is an example of some TLC given to an intake to bring it back to more or less original form. The one on the left has about 20-30 minutes of hand polishing with a ScotchPad-like pad vs. the one as it came on the right.

Here’s a quick run-down of that project and some of the other current sub-projects.

This has been a huge project that’s involved using engine cleaner spray, warm water, wet/dry vacuum, compressed air and lots of elbow grease. The biggest visual success so far has been to dismantle the intake, clean the aluminum through light sanding, seal the aluminum, clean the rubber and plastic pieces and put it back together. I’m going for a clean stock look, not a blingy chrome one, so I was very happy with the result. The rest of the work is really mundane and dirty, so I’m just slogging through it. All I’ll say is that compressed air sometimes blows out a whole lot more junk than you’d expect and I’ve got a major garage vacuuming session due shortly.

Status: Intake done, most of top and sides of engine done. Still need to do very grimy underside.

Since I’m going to be running an electric A/C system and no power steering, these two parts of the engine became obsolete and I could remove them. Pretty simple to remove, though now I need a different length belt and an idle pulley to drive the alternator again. This setup is run in the Porsche 911 GT3 RSR race car, so it’s a matter of figuring out and ordering those part numbers.

Status: Need to order right belt and pulley to complete.

The radiator for the car is in the front, but the engine is in the middle/back, so there are some length coolant connections to make. The kit comes with 3 sets of tubes for this and you have to figure out the angled couplings to make the connections. I ended up just using the long pair of tubes to run parallel to the car under the doors and opted to buy flexible stainless steel hoses to make the connection between these and the radiator.

If you look at the picture below, it’s a pretty intricate set of bends where you have to steer clear of brake lines, ensuring you’re not the lower part of the chassis and preventing the lower control arm from hitting it. It wasn’t all that hard in the end, because the stainless tubes were really easy to work with and you can always bend them back if you needed to adjust. I also wrapper the straight pipes in header wrap which should reduce the amount of heat radiating into the cabin.

I got some more parts and was able to run the brake lines to each wheel and I now have all the pieces to plumb the pedals.

Status: Still trying figure out whether I will put the pedals on sliders before I mount them. My guess right now is that I’ll do a slidable seat with the telescoping column and do a fixed mount of the pedals to the chassis.

I also got a bunch of parts this past week which were blocking progress in certain areas and more are in transit. My transmission came (some work to be done here which will be a separate post later), brake parts arrived, tires and wheels came (TPMS sensor still to come), steering components are ready for welding, etc… lots of pieces to coordinate.

That's Bavarian for "hello" and rather conveniently, "see ya later" as well. Makes life easy. Why Bavarian? Simple: Munich is my hometown.

But right now, I'm in exile in San Francisco, the land of nerds, tech, insane housing markets, hipsters, great weather if you pick your hood right and generally just an awesome place to be. It aligns very well with all of my interests which range from working at / investing in startups, all things cars, lots of sports all year round and constantly meeting driven people who are a whole lot smarter than me.

The theme of this blog is to simply get myself to write about things I've found interesting or have done, perhaps more so outside of work than professionally. If you're interested in what I do for work, take a look at my LinkedIn profile.