It ain’t a real race car without lots of buttons on the steering wheel to do cool stuff, right?

I guess, sorta. While coolness is an added bonus, that’s not really what I was trying to do here. Having the Motec C125 dash set up to read data from the Link G4+ Thunder ECU, I needed to find a way to move the screens on the dash. The dash only displays so much at one time and so you have the ability to scroll within a screen, as well as set up multiple screens to toggle between – as long as you can tell the dash to do the scrolling somehow. Here’s the final product:

One way to do this is to buy the ~$450 I/O module for the dash and wire a few switches directly into the dash. But why take the easy route when you think you still got the skillz to code and could learn a new environment in the process? Hey, here’s another project, because I need more.

Honestly, I was actually shooting to do two things at once: I wanted to create the steering wheel buttons, but I also wanted to read from a USB Tire Pressure Monitoring System (TPMS) sensor, convert the pressure and temperature of each tire to CAN data and display that data on the dash. For the uninitiated, CAN is the automotive industry standard in which different parts of a car talk to each other and send data around. Think of it like WiFi or Ethernet, except for different parts of the car to talk to each other.

To get the physical pieces working, here’s what I used:

I cut out a shape for the backing plate that would fit my steering wheel, mirrored it and cut it out of the urethane sheet. 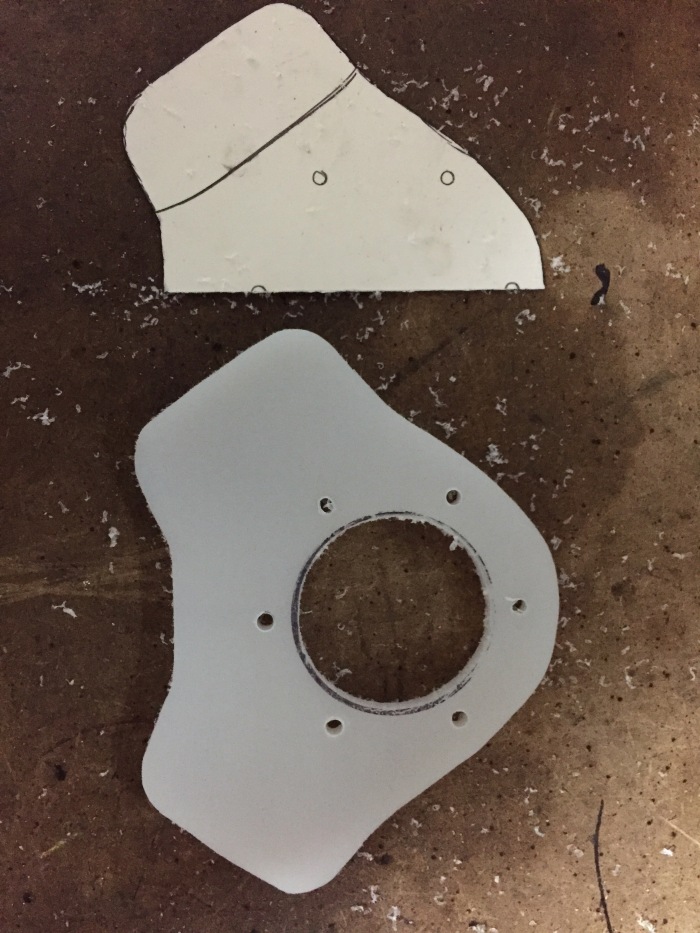 I then added the buttons, soldered the requisite connections to the curled cord and used hot glue to hold all the wires in place on the back of the plate.

The curled cord on the steering wheel connected to the Deutsch DTM 6-way connector allows me to easily remove the steering wheel anytime via the quick disconnect. Six connections are need: ground, 4 colored buttons and at some later point the horn button as well, which is currently inoperable. The easy disconnect also allowed me do develop all the software on my office desk.

Power here comes from the USB connector, which is also how the Arduino board gets power within the car. Below is a picture of the board in its case with the USB shield and TPMS sensor. The two-wire Deutsch DTM connector is the CAN bus connection and the 6-wire. This box is mounted under the dash and can easily be opened with 4 screws.

For now, I’m using three buttons. One to scroll screens, one to move lines within a screen and a third one to change the background brightness on the dash. One cool thing was that the logic for the CAN signal for the brightness was slightly different from the other buttons, but it was easily changed in the software in less than 5 minutes and no compile error on the change. It’s just software! 🙂

Writing the Arduino code was generally pretty simple since it’s more or less C syntax, which I wrote a lot of code in back in the day. There were a couple of key hurdles:

So that’s it. It was really fun project and it’s been super reliable. The Arduino boots super fast too. I’m still trying to figure out what to do with the fourth button or what else I could do with the Arduino. Perhaps there’s something to be set or changed on the ECU, which I might do. Like the dash, the ECU will read CAN signals sent to it on that same bus and can act on them. I’m open to any ideas you might have. Let me know!

That's Bavarian for "hello" and rather conveniently, "see ya later" as well. Makes life easy. Why Bavarian? Simple: Munich is my hometown.

But right now, I'm in exile in San Francisco, the land of nerds, tech, insane housing markets, hipsters, great weather if you pick your hood right and generally just an awesome place to be. It aligns very well with all of my interests which range from working at / investing in startups, all things cars, lots of sports all year round and constantly meeting driven people who are a whole lot smarter than me.

The theme of this blog is to simply get myself to write about things I've found interesting or have done, perhaps more so outside of work than professionally. If you're interested in what I do for work, take a look at my LinkedIn profile.